Aaron Rahe’s pictures are full of bizarre, fantastic, surreal figures. They are distorted, here they have no arms, there most fragile legs; one body has two heads, held together by band-aids while empty eyes glance stupidly; other figures have just one eye. We see huge skulls with a broadly grinning row of teeth and a Pinocchio-nose. In this world, as the artist says, nothing is complete, everything is rudimentary, gnawed, patched up, deformed, disoriented, excessively cheerful and held up to ridicule. A world at its absurd end.

However, there is also another work: it is precise, clear, neat. And it is not a painting, but a sculpture. Its point of departure is one of the most enigmatic works in art history, Albrecht Dürer’s etching Melencolia I. Therein a winged being, in pensive thought, sits before a truncated triangular trapezohedron, a geometric object even more complex than its name. Aaron replicates this polyhedron in large numbers and builds these objects into a column that could be endless, each object carrying the insignias of Andy Warhol’s Brillo Boxes. The work’s title: I love America and America loves me.

This work of art is a little stroke of genius, quoting no less than five heroes of art history: Dürer, Warhol, the Romanian Constantin Brancusi, who invented the endless column, and Joseph Beuys, whose New York performance in 1974 gave the work its title. The mystic Beuys and the pop artist Warhol belonged to the second-to-last generation of the „heroic“ modern period, before conceptual art finalised that era and the idea of the post-modern took the lead. Aaron’s homage to modernism is, at the same time, a caricature of this era: there is hardly anything more absurd than taking, of all things, one of the most complex geometric structures as the basis for endless repetitions.

With this sculpture the young artist characterises the situation his generation is facing: it’s a heap of ruins. The major fuel of modern art, innovation, has fallen flat; Aaron’s painting NEW reduces this principle to a banal marketing tool. The post-modern impulse, which had to work out the avantgarde in the 1980s, is of no help either; in NEW we read the lettering „THOSE WHO DO NOT LEARN FROM DIE ACHTZIGER [THE 80s] ARE DOOMED TO REPEAT IT“. „There is no innovation in art,“ the artist concludes, „painting and sculpture are old-fashioned, therefore they are a playground for innovation.“ Meaning: the only way out of this heap of ruins is to address the fundamental concerns of art. So he connects Kant’s term of the „thing-in-itself“ to an age-old artistic problem, the relationship between figure and ground: each object, each figure in a picture must be connected to the ground in such a way that they form a unit – a principle that equally applies to the existence of humans in the world. Meticulously he investigates the relation between a picture and the thing that it represents: broadest brush strokes are proof of the painted image, a collage inserts real objects in the art context.

If there is a model, a hero for Rahe’s generation, then it is Martin Kippenberger, the anti-hero. Like nobody else, he undermined, with his „dirty painting“, the cliché of the artist-genius, always with a broad grin, often in a melancholy mood – just like the winged being in Dürer’s Melencolia. Aaron Rahe painted himself as such a being, a zeppelin high-flyer with a snarling grin, an artist of the new, very old type. Just like the eminent art historian Erwin Panofsky interprets Dürer’s etching: the melancholy of the artist as an indication of his genius. 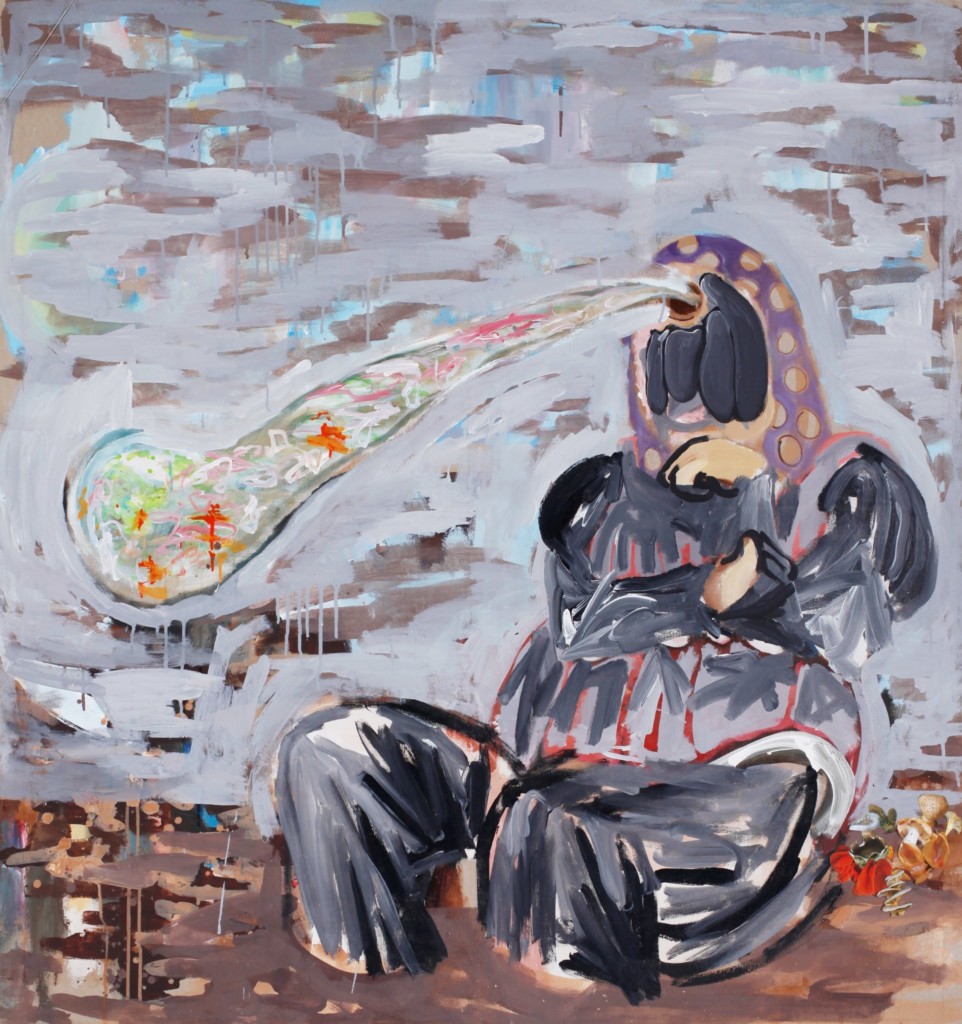 I love America and America loves me 2015

I love America and America loves me 2015

I love America and America loves me, Detail 2015

I love America and America loves me, Detail 2015

Self portrait as Hindenburg III 2016

Self portrait as Hindenburg III 2016