Henri Haake’s silent, colorful paintings are pictures of the in-between: they oscillate between reality and appearance, atmospheric and tangible, dream and day, cheerfulness and melancholy, between object and abstraction, space and surface. Significantly, the beach – that unstable area between the ever-changing water and firm ground, filled with hazy light – is a common motif.

In particular, the in-between signifies the relationships of the characters, be they playful or meaningful, obscured or open – or strikingly absent. The few clear positions, such as the punchy boxer on the one hand and the lascivious woman on the other, can only underline the ambivalence on all sides. And they add that touch of irony that makes these pictures so appealing.

The obviously used, but in detail not fully painted double bed in a closed hotel room – Begoro – is an example of the many stories that are hinted at in these pictures, but not told. The window curtain, filled with a colorful pattern, is more eventful than the empty bed.

The young artist is a globetrotter, he finds his motifs around the world, on the beaches of Africa, in the bars of Cuba and the streets of New York – or in the local Kreuzberg. With a keen, watchful eye he discovers the typical, the cliché: Be it the poses of the boxers, footballers or billiard players, the casual attitude of the beach boy or the streetwise Weird Guy – poses that remind us of the figure studies of classical art. But the artist also describes aptly the special atmosphere on the footballers’ beach of Rio de Janeiro, where the glassy-dense light mixes with the grainy texture of the sand.

The forms and positions of the figures are of particular importance. On the one hand it is about the way they pose, present themselves; on the other hand, it concerns their emotional state of mind. Do they stand alone or with others, do they look into themselves or are they in conversation? Often, the characters also remain isolated within a group, particularly striking in the football scenes: Despite the commonality of the game, each one of the young men stands for himself.

The in-between also applies to the specific coloring. Henri Haake uses hardly any primary colors; as a rule, the tones are mixed, earthy, like weathered. Whereas in earlier phases of the work the colors flowed into each other with powerful brushstrokes, they are now clearly demarcated as monochrome fields. In this way, they get an intrinsic value independent fom the object they signify, and create an almost constructivist color field painting.

It should come as no surprise that a young artist of the 21st century not only takes inspiration from art history, but also from films. Henri Haake names in particular the innovative, socio-critical and relationship-dramatic works of Godard,  Bergman and Fassbinder as well as Fellini’s “La dolce vita”. However, one also thinks of Fellini’s “Ship of Dreams” or Visconti’s “Death in Venice”, and of Stanley Kubrick: the shifting between reality and fantasy in “2001 – A Space Odyssey” or the shimmering candlelight in “Barry Lyndon”. “Don’t you think women have something magical?” This question by Jean-Pierre Léaud in François Truffaut’s “La nuit américaine” can be seamlessly transferred to the paintings of Henri Haake: they too have something magical about them. 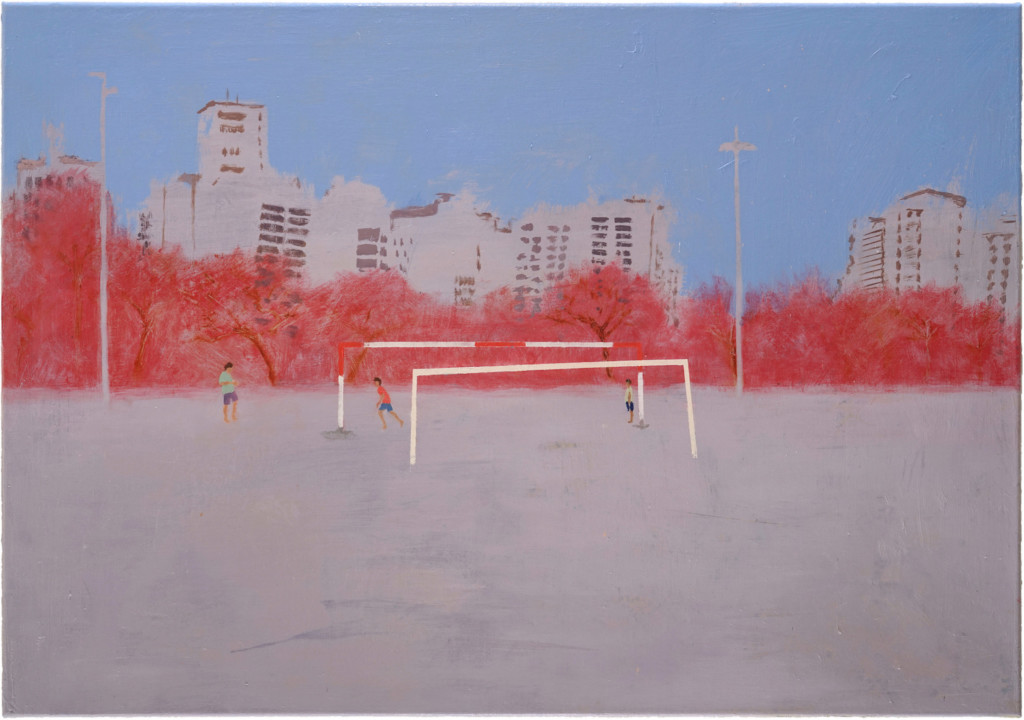 Lives and works in Berlin

2011-2016 participated regularly in the Rundgänge of the Universität der Künste, Berlin