It was a spectacular sight, during the summer of 2002 in the center of Berlin: on a still-deserted building ground, before the backdrop of the shiny skyscrapers at Potsdamer Platz, there stood, unexpectedly, a modest hut made of pinewood and larch shingles. The confrontation couldn’t be more striking: there a monstrous architectural structure of city quarter size, symbol of global capitalism and unrestricted consumerism, with multinational corporations like Daimler-Chrysler and Sony as faceless developers; here a tiny cabin, in its original form knocked together with found and used material by a single man.

Tobias Hauser designed the hut as a replica of the cabin that the philosopher and poet Henry David Thoreau had built for himself in 1845 in the woods outside the small town of Concord, Massachusetts – for just 28 dollars. Ever since, the cabin at Walden Pond has been a romantic symbol for a life close to nature and remote from civilization, just as Thoreau’s book „Walden; or, Life in the Woods“ has become the bible of all dropouts. At the same time, Thoreau, one of the „transcendentalists“ around Ralph Waldo Emerson, was an advocate of „civil disobedience“ who preferred to go to jail rather than paying taxes to a state that accepted slavery. Through this stance he is one of the fathers of all protest movements.

Tobias Hauser is a most political man, too. He developed the idea for „Walden“ after the terrorist attack on the New York World Trade Center and the subsequent war in Afghanistan; as he says, he wanted to revive the original democracy of the American founding fathers, without any trace of fundamentalism. It was no accident that for this he chose Thoreau’s hut, since houses are central for his work: the house as a symbol of the basic human want for shelter. Nature, too, is a constant theme in Hauser’s work, albeit in a stylized, abstract form. The most recent example is a five-meters-tall liberty tree made of aluminium tube, after a sketch by Goethe. Well known as a symbol of the French revolution, the „Tree of Liberty“ goes back to the independence struggle of the American colonies.

For Thoreau the cottage by the lake was not a life’s goal, but an experiment: he abandoned it after two years without regret. Other people took over and finally dismantled it; today there is a replica at Walden Pond. Hauser was not interested in an exact copy, so his hut is empty and cannot be entered. Instead, it is an illustration of the idea that made Thoreau construct his cabin: the necessity to choose one’s very own way. Thoreau: „If a man does not keep pace with his companions, perhaps it is because he hears a different drummer.“

Changing the perspective, we will not see the hut as a comment on the Potsdamer Platz situation, but instead the high-rises as a backdrop that emphasizes the humble character of the cabin. So the little building is able to unfold its effect at other places as well, for instance at the Munich Olympic Parc where Hauser exhibited it in 2003. Today it is located in a private garden in southern Germany. Yet wherever the hut might stand, it is the materialized version of the maxim so popular today: „Don’t dream your life, live your dreams!“. „The mass of men“, Thoreau was convinced, „lead lives of quiet desperation“ – simply because they do not follow the beat of their own drum. The cottage tells us that this is possible indeed, that there are always alternatives for the dominant concepts of society, politics and culture.

For further information on the artist please see his website: Hauser Werke

A Bird's Eye View of the Situation at Leipziger Platz 2002

A Bird's Eye View of the Situation at Leipziger Platz 2002 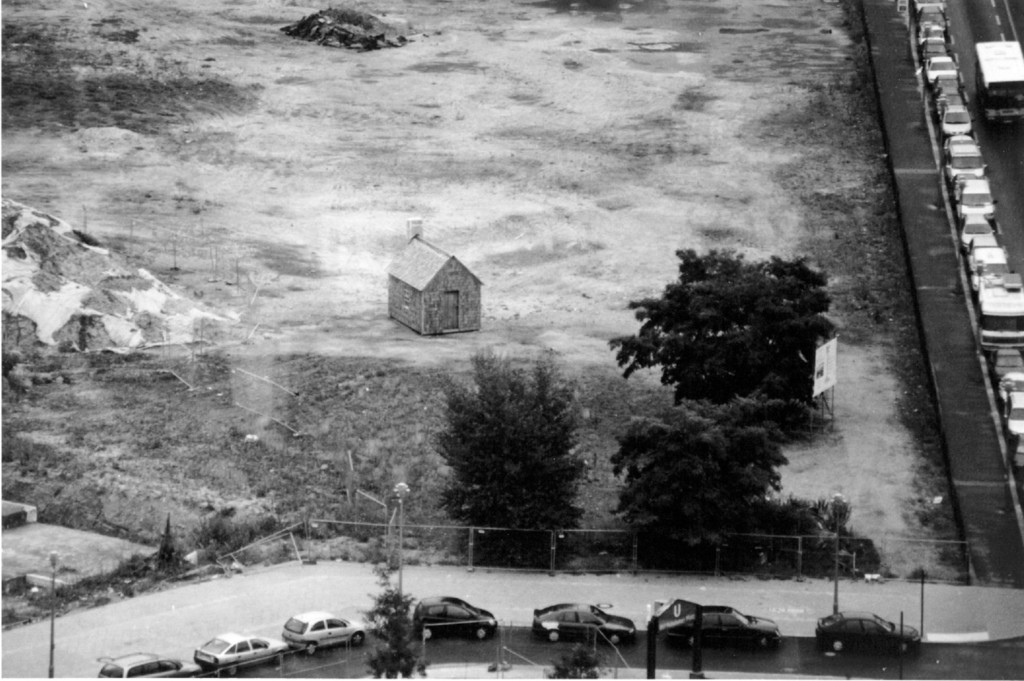 Whereas construction at Potsdamer Platz has been completed in 2002, the site around Leipziger Platz is still mostly fallow land. Tobias Hauser’s hut “Walden” is placed at the location of the former Wertheim department store; today, there is the shopping center “Mall of Berlin”. 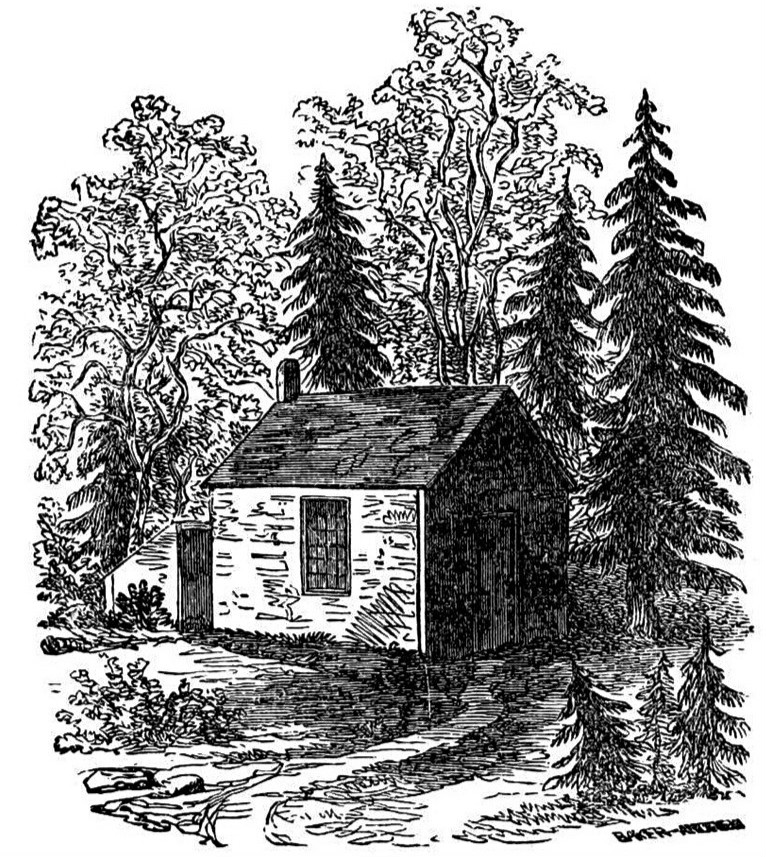 Drawing for the cover of his book "Walden" 2002

Drawing for the cover of his book "Walden" 2002 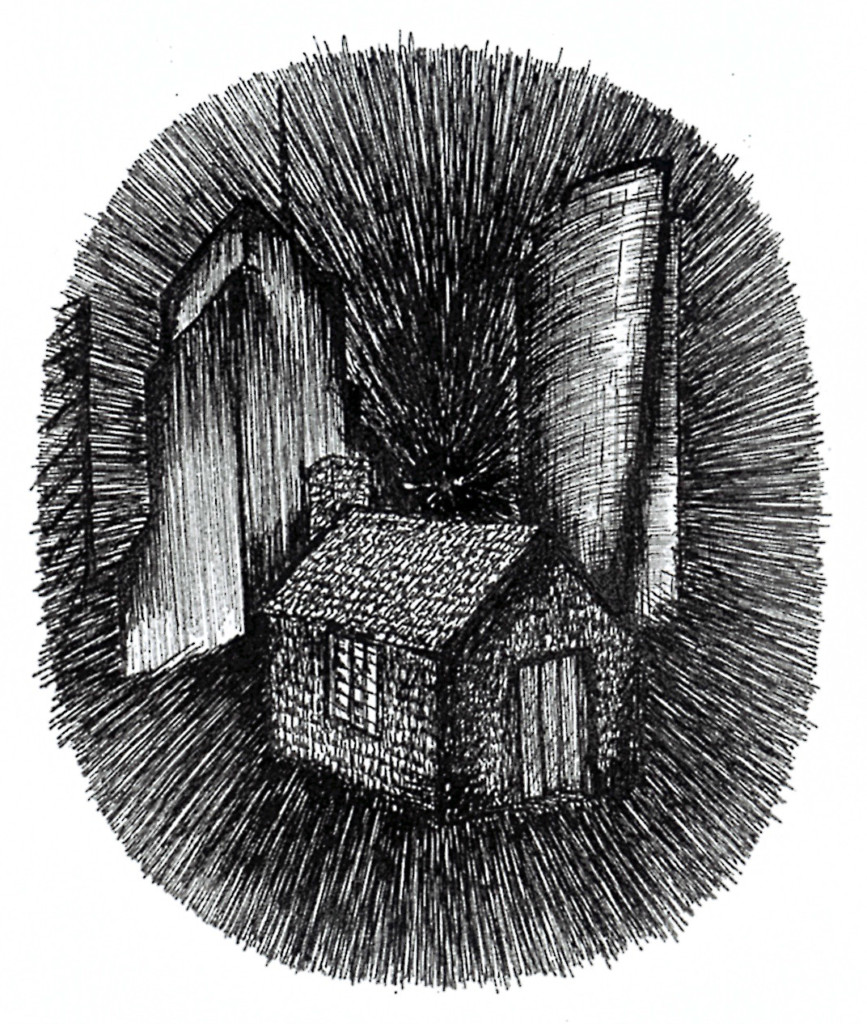 "Walden" before the highrises of Hans Kollhoff and Helmut Jahn 2002

"Walden" before the highrises of Hans Kollhoff and Helmut Jahn 2002 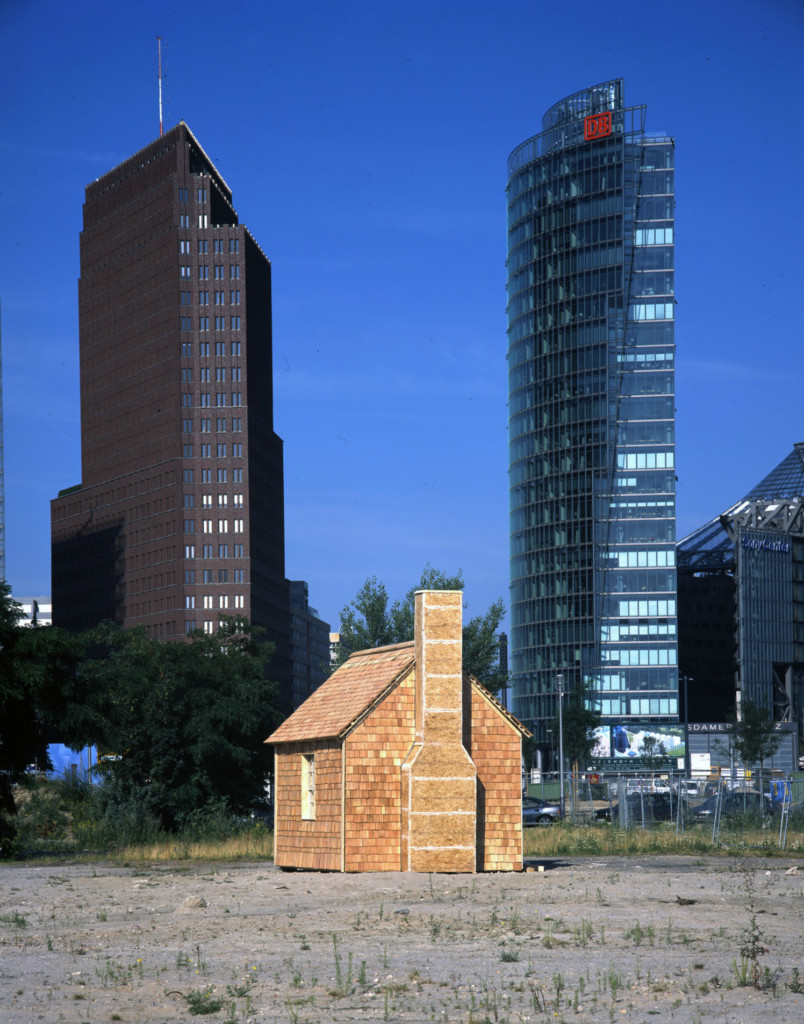 "Walden" with a view across Leipziger Platz towards Potsdamer Platz 2002

"Walden" with a view across Leipziger Platz towards Potsdamer Platz 2002 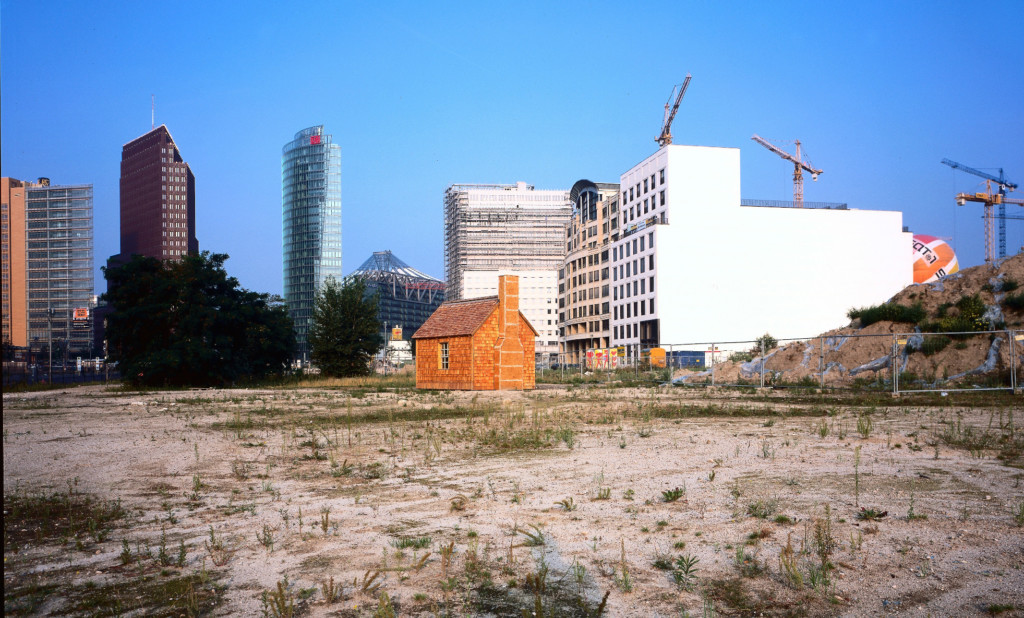 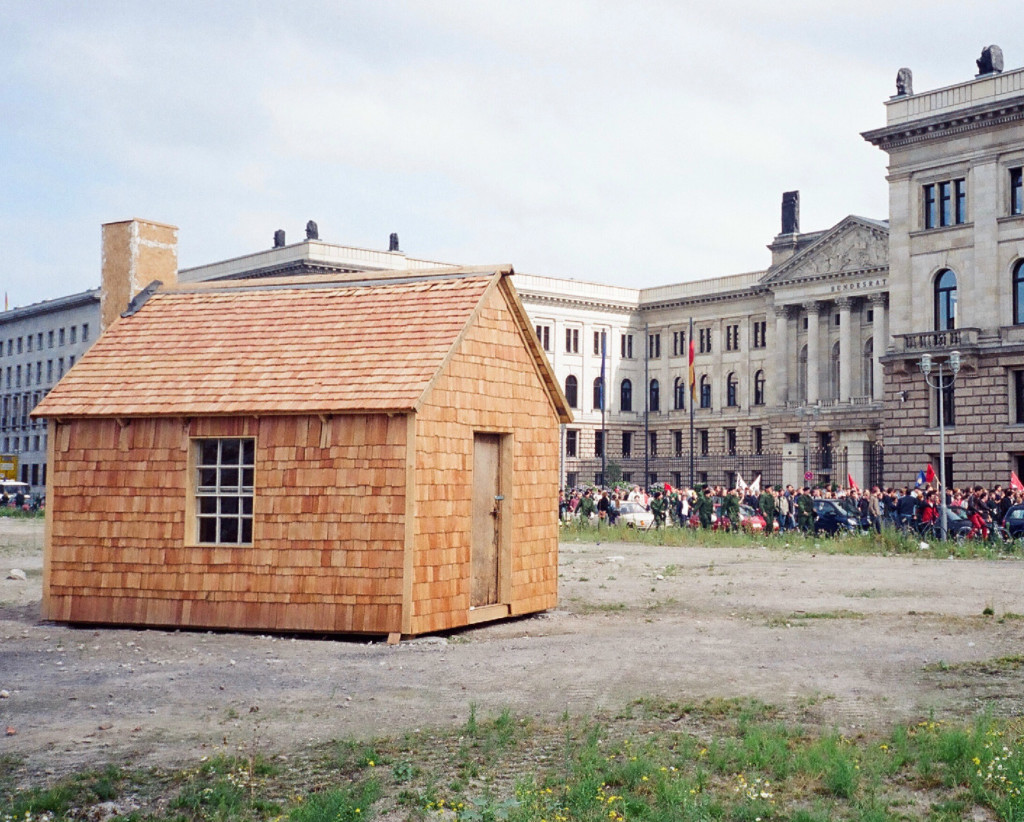 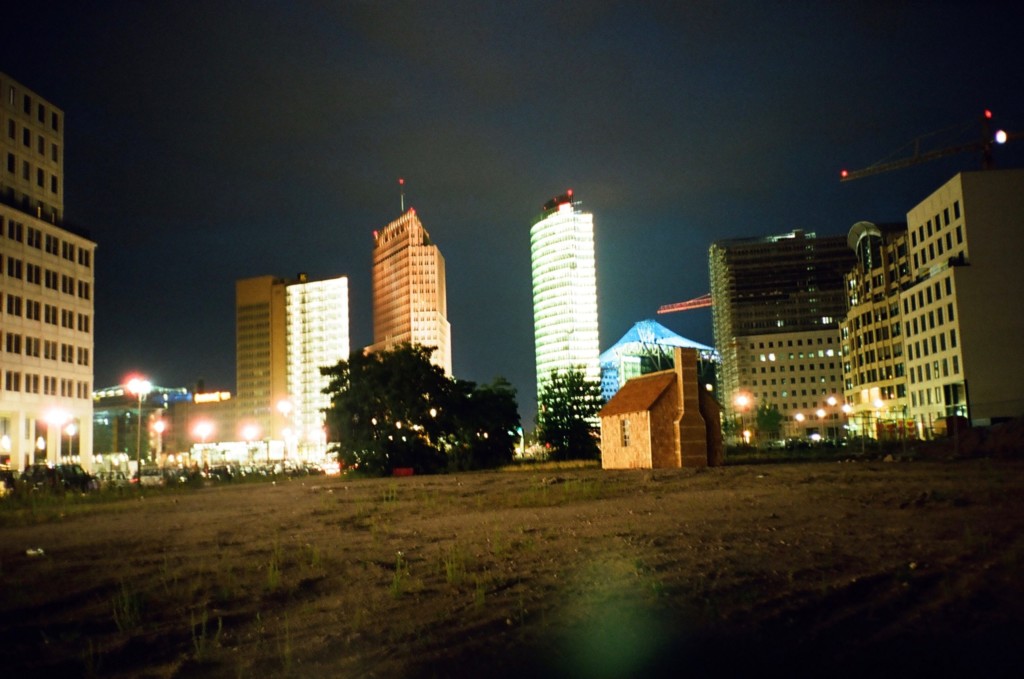 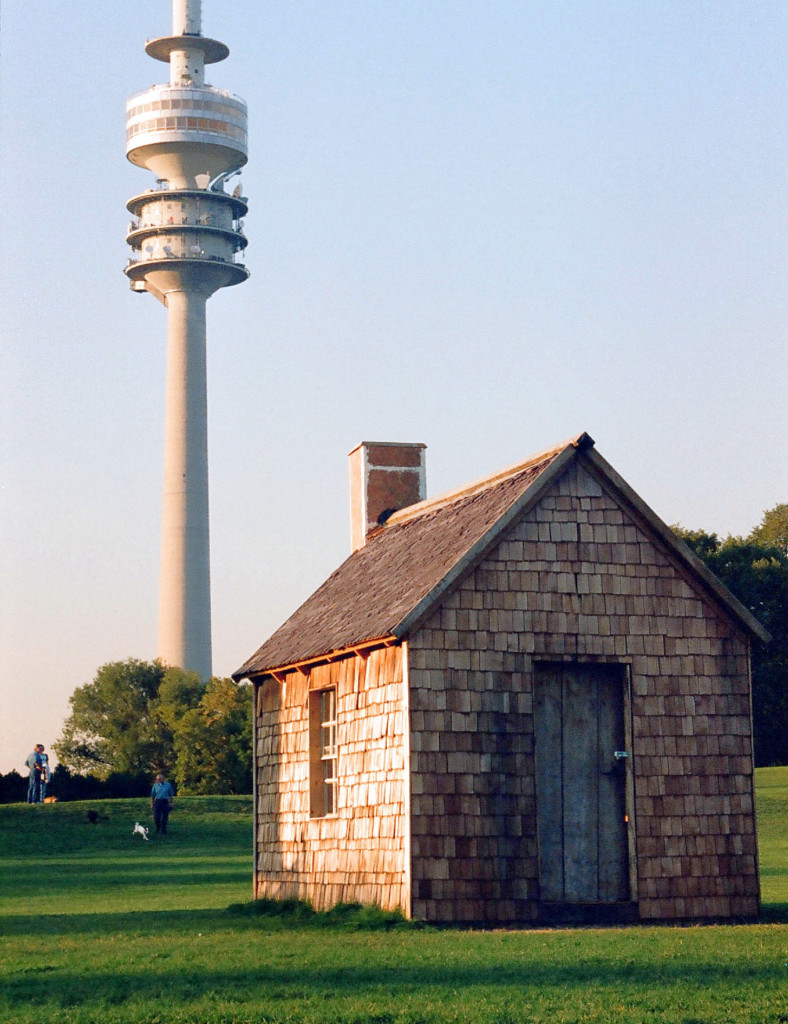 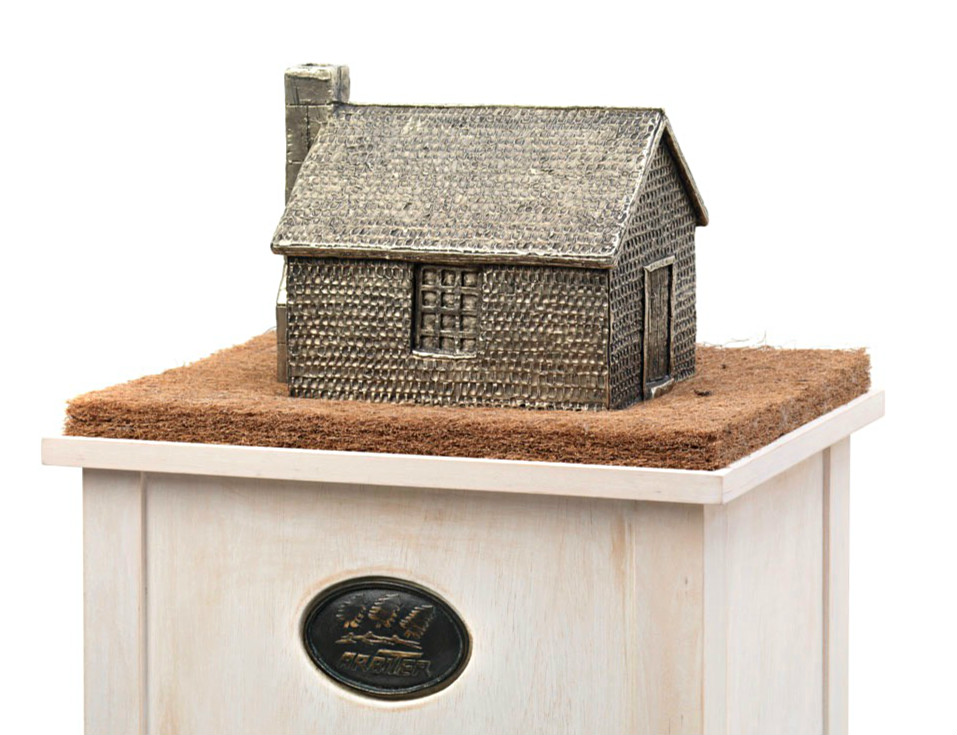 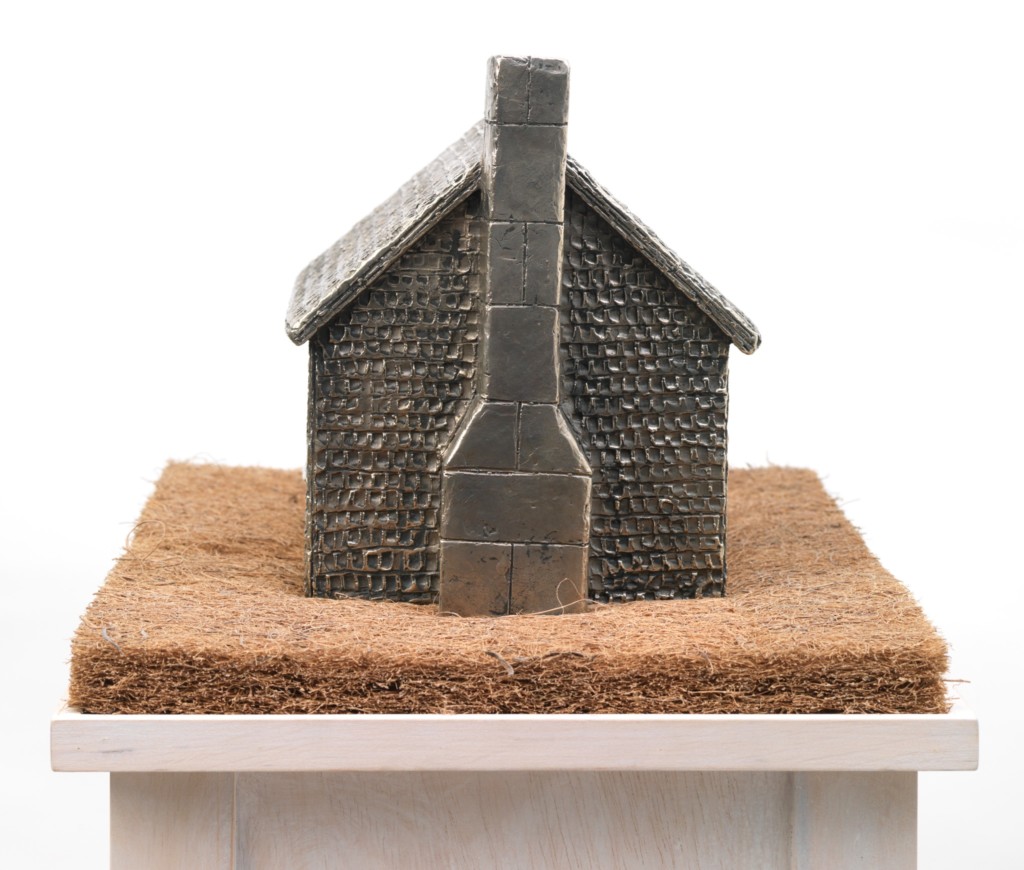 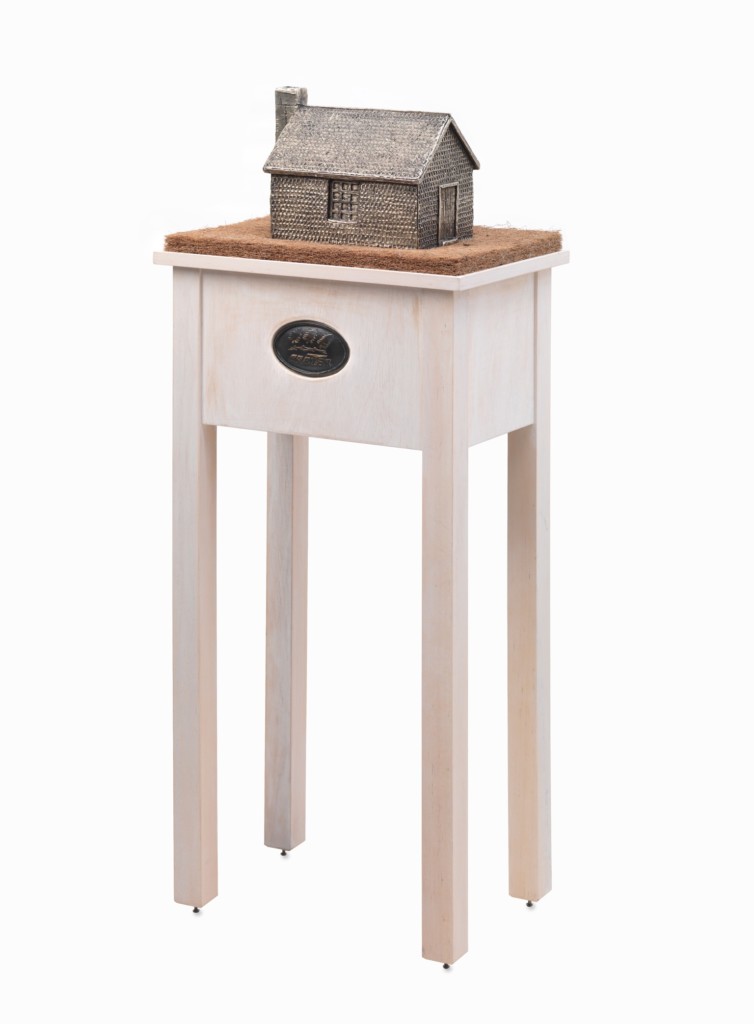 lives and works in Berlin